AntiHero is a board company that was founded by professional skateboarder Julien Stranger in 1995, following a proposition from Thiebaud, who is reported—by Jake Phelps, editor-in-chief of Thrasher Magazine —to have offered Stranger the opportunity during a period of time when both Stranger and Phelps perceived skateboarding as "stale". Stranger has explained the original concept that underpinned AntiHero in the following manner: "Oh, there's was no concept ... well, maybe there was, I don't know. Just kind of balance out the rest, or something, with what was going on with us." Phelps has stated further to Stranger's vague explanation:

I think if you pay attention to life and the way things are, that you, you come out pretty jaded by, you know, life. Or things aren't the way they should be. I think Anti Hero is a reflection of that. I think Julian's own twisted take on things has been, like I said, there's no expectation—we just skate, we fuck off, we have a good time. We go to trips sometimes and nothing happened. Or sometime we go on a trip and everything happens at once; you never know. And I think that that translates very much into John's way of life—whether it's hunting, fishing, or whatever, John's [Cardiel] an outdoorsman, and I think that, that hearty spirit of America translated very well with Julian's gritty grime of, like, the city slime, into making a really solid, "This is what it is to us."[20]

Longtime professional skateboarder Jeff Grosso, who grew up skateboarding with prominent figures such as Neil Blender and Lance Mountain, joined the company in early 2011 and explained the process in an August 2013 interview: "I'll ask, I'll shoot at the mountaintop, and maybe I'll land at base camp. Once I got the courage to call them up, or whatever, and then they were like, 'Well, we have to vote.', or whatever, 'cause they run it like a gang ... So once I found out that they all, like, voted yes ... it was a proud moment."

The company commenced 2014 with the addition of Grant Taylor to the team on January 1, releasing a promotional image that states: "Grant Taylor ... is in the van!" A corresponding three-minute video was also released to acknowledge the recruitment, featuring the accompanying print advertisement that reads: "GRANTIHERO Grant Taylor ... Flys with the Eagle!". Formerly a member of the Alien Workshop team, Taylor was the recipient of Thrasher's prestigious "Skater of the Year" award in 2011. 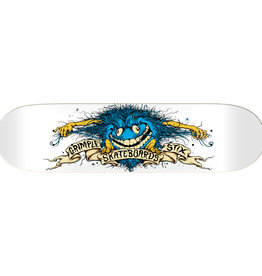